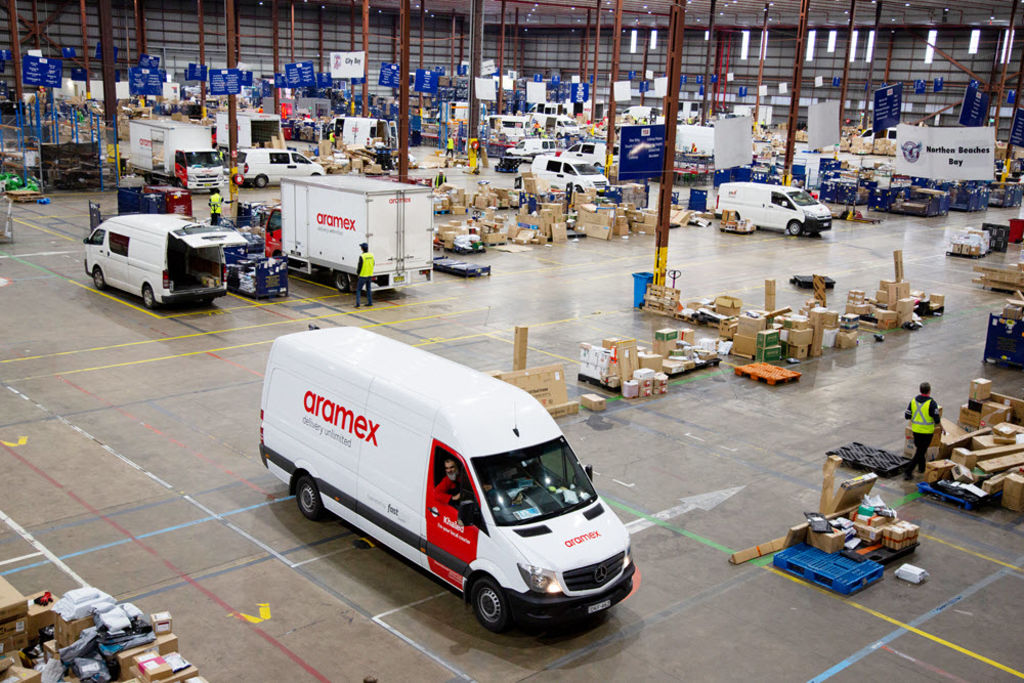 Twenty-seven years ago, pathologist Angelo Tseros ditched his science career to become the first courier franchisee with Australian company Fastway Couriers. Back then, he handled 100 parcels a day for his one printing client.

Today, still with the company – last year rebranded as part of the international courier company Aramex – he oversees a team of 60 couriers, with some drivers picking up 500 to 600 parcels in every 24-hour period.

“The business is huge now,” said Tseros, 55, the head of Freight Management Systems, contracting to Aramex. “We keep going up and up and there’s never been a year where we’ve seen a lesser volume of freight than the previous year’s.

“And as long as my legs will carry me, I’ll continue on.”

Aramex’s biggest warehouse is now a massive chunk of real estate in western Sydney’s Chullora, a 22,000-square-metre, high-roofed space that sees 300 to 400 couriers visiting each 22-hour day that it’s open.

One of the company’s 28 depots around Australia, it’s today an hive of activity, indicative of the boom currently lifting Australia’s industrial property sector.

As a result of the sharp rise in the popularity of e-commerce over the past few years, and the steep jump again because of COVID-19-related restrictions, the business currently handles about three million parcels a month nationally, with 800 courier franchisees across the country.

“A lot of people have been forced to shop online because of coronavirus, and had no choice about it,” said Aramex Australia chief executive Peter Lipinski.

“But now so many have discovered the convenience of shopping that way, we think a lot of them will stay with that.

“The past couple of years, we’ve been seeing double-digit growth, rising by 10 to 15 per cent, but this year, it’s really accelerated. I think we’re 40 to 50 per cent up on last year. It’s like a beehive in here when everyone comes in at once.”

With such a large volume of freight now criss-crossing the country daily, it’s hard to imagine how on earth the companies transporting all those bags, parcels and boxes keep track of everything, and see them quickly and efficiently dispatched to their various destinations. In some ways, it’s surprisingly low-tech.

The warehouse has entrances for nine to 10 B-double semi-trailers to arrive each day, from which all the goods are unloaded from blue metal cages and the larger pieces on pallets, checked for their dimensions and weight and have their barcodes scanned.

Then the trucks are reloaded while the goods they’ve delivered are distributed into different piles all over the ground, each signposted for a different area of Sydney.

From those piles, the couriers drive in every day in different shifts from 5am, in vans, private cars and occasionally motorbikes, and pick up the parcels for their assigned areas.

Depending on the parcels’ dimensions and weight, ranging from a 300-gram satchel to a 25-kilogram box, they might pick up 200 to 300 items at a time, and return after lunch to pick up for their second run, bringing in the parcels they’ve collected on their way. Some of the couriers may end up working from 5am until 8pm at night.

Andrew McKenna, chief executive of Aramex’s Sydney warehouse, says some couriers working from the location might work singly, while others might work as a husband-and-wife pair, as a family, or as a team.

“Usually, with a business of this age – and we started in 1993 as Fastway in Australia – would be seeing single-digit growth and that would be fantastic. But online retail is now growing fast.

“We’re seeing the demand rising for alcohol, for pet food now people are seeing the convenience of ordering online, and for flat-pack furniture. With COVID-19, a lot of people are working from home and are ordering desks, and also rowing machines and gym and fitness equipment.”

Pre-coronavirus pandemic, a great proportion of the company’s freight would be business-to-business. But now it’s being dominated by businesses selling to consumers.

With restrictions on the operation of restaurants and bars, more people are ordering wine online because they’re drinking at home instead.

They’re also buying smaller air-freighted packages from eBay and Asia, often small-size, high-volume apparel online, and larger items from the US, such as household appliances. Amazon is also now a huge source of parcels.

In 2016, the firm joined Aramex, one of the world’s largest global express transport and logistics companies, in order to extend its reach, and from July 2019 started rebranding its operations from Fastway blue to Aramex’s red.

“We used to be a small-to-medium-sized company, but now we’re moving into being a larger business up the chain,” said Mr Lipinski. “People tend to know Fastway Couriers and our history, but Aramex isn’t so well known in Australia, so that’s part of the challenge.”

The company has also been keen to innovate. It started Parcel Connect, a service where consumers can drop off parcels at a local agent, possibly a convenience store, newsagent or bottle store, to be picked up by a courier, and opt to have deliveries there if they’re not going to be home.

It’s proved a hit with both the addressee and the agent – often people coming to pick up parcels will buy something from the store are the same time.

The tremendous uplift in business also means the company is investing in more technology to increase efficiencies. Today, two 46-metre-long conveyor belt systems are being installed, and rewired, from which parcels can later be sorted. There’s also been some money ploughed into investigating drone technology.

Tseros, who abandoned science for the joy of being his own boss as a courier franchisee, and then running his own team, has never looked back.

“It’s a great career,” he said. “I remember my first customer said to me that he wanted a written guarantee that, if I went bust, I’d give him his first $250 back. It never happened.”